The Naked Sprout is constantly involved in the community in promoting veganism and a plant-based healthy lifestyle. When we opened in 2011, we never imagined how well received our idea would be. It goes to show that YOU want to eat healthily; YOU want to transform yourselves through plant-based foods. By making decisions of buying more organic food and eating plant-based foods, we start to tell those big organizations that are dominating the food chain, that we want a healthier world. We start to change the world!

Thank you for nominating and voting for us! We are so humbled by your enthusiasm for all the hard work we do and the food we make! We hope to conitnue to impress you and help you on your life journey!

We won the award from Hamilton Magazine for Healthiest Food Served.

We won 19 awards in the Burlington Post's Reader's Choise Awards.

We were nominated in 7 categories for Burlington Post’s Readers’ Choice Awards and we WON in ALL 7 categories. Our yoga studio also won Best Yoga Studio. Here are the categories we won in:

We Won “My Favourite Find This Year”Award in the Best of Canada 2012 Natural Health Awards. It is our honour to serve up organic vegan culinary delights to all who visit!

We won the Hamilton Magazine’s Award for Best New Restaurant 2011!

We have been invited to and have participated in many events in our community.  We have also been intereviewed by local TV agencies and been highlighted in prominent magazines. Take a look.

The Halton Pumpkin Trail ran for the month of Ocotber, and we participated by using local pumpkins to create many different Pumpkin-inspired Soups, as well as our featued Pumpkin Risotto and Pumpkin Pie!

Teresa Baerg of Burlington Lifestyle visited and wrote a review of The Naked Sprout and our sister company, Chrysalis Yoga. You can Find It Here!

Our Fabulous Co-Founder Clayton wrote an article on juicing that has just been published in Silver & Gold Magazine! Full of valuable and interesting info - Check it out on page 21!

WoW Living TV is a fun, family lifestyle and entertainment show with a focus on healthy living for all ages. As part of the “Healthy Home Inside & Out” episode, The Naked Sprout was featured to share how a vegan diet is not only a super healthy choice, but a delicious one too! Check out the segment (at 18:30 in the show), where Chef Conner makes our Raw Manicotti!

Wow, a food critic from The Hamilton Spectator came to The Naked Sprout and we heard he was a carnivore. We also heard that he can be tough. What a relief when we read the article. We were jumping over the moon!

Check out his article: The Naked Sprout is a tasty change for this carnivore

CHCH came to our restaurant and interviewed Jane, our Chef and other vendors from Hamilton Veggie Fest. Check it out. CLICK on the IMAGE below. 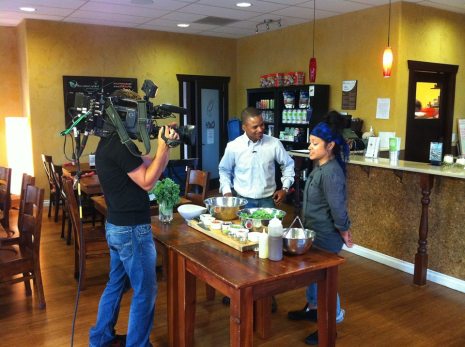 Check out our First Interview with Happy Cow and why we decided to open The Naked Sprout.

Rian, who used to work at The Naked Sprout, before heading off to University, ate raw and mainly fruit. Check out his race and how nutrition helped his performance.

The Naked Sprout was at Niagara VegFest serving up Wild Seed Massaged Kale Salads and Somebody Kelp Me noodles flying all over the place; fresh young coconuts being hacked open (lovingly) and slices of raw cheesecake dished out for all to enjoy!

The Naked Beat drum circle came to The Naked Sprout. See if you can spot our owner, Pete and Director, Clayton.

We were interviewed by Terra Home & Garden. To view our section on Chrysalis Yoga & The Naked Sprout, please fast-forward to 10 minutes into the interview.

Check out our Sprout Server Nicole serving up some delicious raw pancakes at our One Year Anniversary Party in this month's edition of SNAP!

We supplied food at the Green Zen Lounge where film makers, actors, press and others shared our amazing food. We received amazing Raves about the food!

Featured in the Hamilton Magazine - 2011

Executive Chef, Pete, was interviewed by Hamilton magazine in an article that listed the top healthy, vegan restaurant in the area. Our lasagne was featured in the article.

Our grand opening party was captured by the press. We also had Blair Lancaster, councillor, come to visit the yoga studio and restaurant.